Bigelow Aerospace has sued NASA for alleged breach of contract over testing the North Las Vegas company conducted on its B330 space station module prototype.

Bigelow is demanding just over $1 million in unpaid contract fees and attorney costs. At issue is a contract under which Bigelow would complete long-term pressure leak tests on the B330 module.

END_OF_DOCUMENT_TOKEN_TO_BE_REPLACED

We have received many inquires about what is going on with the Gateway program. As many of you have already read it appears that negotiations are already underway between NASA and Northrop Grumman for a modified “mini hab” that is going to be docked to the PPE. What we think we know is that NASA wants to use a modified version of the Cygnus cargo vehicle, which is built by Thales Alenia. The current use of the Cygnus is to haul supplies to the ISS and dispose of trash by burning up in the atmosphere.

What has also been discussed is that the Cygnus would be converted to a structure with multiple docking ports. Our understanding at this time is that this structure would internally not have life support systems that without being attached to another structure wouldn’t keep people alive. We agree that a multi-port docking node is a valuable asset.

We have also been told by NASA that there is some future possibility to expect the emergence of a domestic habitat someday. As always, that is precisely what Bigelow is interested in building. In fact, our habitat is actually a standalone space station. We think the B330 standalone space station would make an excellent low altitude lunar depot.

Someday if NASA were to give us the green light, we would be very excited to be part of the Gateway program, a future low-level lunar depot program or to even land a lunar base on the moon.

END_OF_DOCUMENT_TOKEN_TO_BE_REPLACED

Nearly years after it first sought input on the subject, NASA is asking U.S. industry for proposals on commercial modules to dock to the International Space Station (ISS).

END_OF_DOCUMENT_TOKEN_TO_BE_REPLACED


WASHINGTON (NASA PR) — Over the next several months, NASA will conduct a series of ground tests inside five uniquely designed, full-size, deep space habitat prototypes. The mockups, constructed by five American companies, offer different perspectives on how astronauts will live and work aboard the Gateway – the first spaceship designed to stay in orbit around the Moon, providing the critical infrastructure needed for exploration, science and technology demonstrations on the lunar surface.

END_OF_DOCUMENT_TOKEN_TO_BE_REPLACED

Paragon Space Development Corporation will develop a flexible radiator for inflatable habitats and an improved condenser for use on human space missions with the help of NASA funding.

The space agency has selected the Tuscon, Ariz.-based company for two contracts under its Small Business Innovation Research (SBIR) Phase 1 program. The agreements are worth up to $125,000 apiece over 13 months.

END_OF_DOCUMENT_TOKEN_TO_BE_REPLACED

With the two launches of B330-1 and B330-2 expected in 2021, the time is now in 2018 to begin BSO activity. These single structures that house humans on a permanent basis will be the largest, most complex structures ever known as stations for human use in space.

END_OF_DOCUMENT_TOKEN_TO_BE_REPLACED Robert Bigelow is scheduled to announce a new company, Bigelow Space Operations, on Tuesday, according to media reports. Last week, the Bigelow Aerospace tweeted out an announcement with a link to a website.

There are no further details at this time.


There have been some varied reactions to the Trump Administration’s proposal to end direct federal funding to the International Space Station (ISS) in 2025 in favor of commercial ventures in low Earth orbit and a focus on returning astronauts to the moon.

“The administration’s budget for NASA is a nonstarter. If we’re ever going to get to Mars with humans on board and return them safely, then we need a larger funding increase for NASA. The proposal would also end support for the International Space Station in 2025 and make deep cuts to popular education and science programs. Turning off the lights and walking away from our sole outpost in space at a time when we’re pushing the frontiers of exploration makes no sense.”
END_OF_DOCUMENT_TOKEN_TO_BE_REPLACED 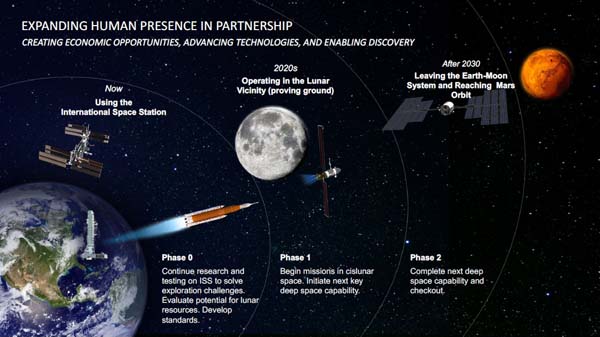 
Robert Bigelow and his space company worked with the Department of Defense to investigate UFOs, according to a story in The New York Times.

The Defense Department has never before acknowledged the existence of the program, which it says it shut down in 2012. But its backers say that, while the Pentagon ended funding for the effort at that time, the program remains in existence. For the past five years, they say, officials with the program have continued to investigate episodes brought to them by service members, while also carrying out their other Defense Department duties.

The shadowy program — parts of it remain classified — began in 2007, and initially it was largely funded at the request of Harry Reid, the Nevada Democrat who was the Senate majority leader at the time and who has long had an interest in space phenomena. Most of the money went to an aerospace research company run by a billionaire entrepreneur and longtime friend of Mr. Reid’s, Robert Bigelow, who is currently working with NASA to produce expandable craft for humans to use in space.

Working with Mr. Bigelow’s Las Vegas-based company, the program produced documents that describe sightings of aircraft that seemed to move at very high velocities with no visible signs of propulsion, or that hovered with no apparent means of lift.

Contracts obtained by The Times show a congressional appropriation of just under $22 million beginning in late 2008 through 2011. The money was used for management of the program, research and assessments of the threat posed by the objects.

The funding went to Mr. Bigelow’s company, Bigelow Aerospace, which hired subcontractors and solicited research for the program.

Under Mr. Bigelow’s direction, the company modified buildings in Las Vegas for the storage of metal alloys and other materials that Mr. Elizondo and program contractors said had been recovered from unidentified aerial phenomena. Researchers also studied people who said they had experienced physical effects from encounters with the objects and examined them for any physiological changes. In addition, researchers spoke to military service members who had reported sightings of strange aircraft.


HOUSTON (NASA PR) — The Bigelow Expandable Activity Module, known as BEAM, will remain attached to the International Space Station to provide additional performance data on expandable habitat technologies and enable new technology demonstrations. NASA awarded a sole-source contract to Bigelow Aerospace to support extension of the life of the privately-owned module, and its use to stow spare space station hardware.

END_OF_DOCUMENT_TOKEN_TO_BE_REPLACED

Las Vegas, NV and Centennial, Colo., Oct. 17, 2017 (ULA/Bigelow Aerospace PR) – Bigelow Aerospace and United Launch Alliance (ULA) are working together to launch a B330 expandable module on ULA’s Vulcan launch vehicle.  The launch would place a B330 outfitted module in Low Lunar Orbit by the end of 2022 to serve as a lunar depot.

END_OF_DOCUMENT_TOKEN_TO_BE_REPLACED


WASHINGTON, DC (NASA PR) — NASA is exploring options with Bigelow Aerospace to extend the life of the privately owned Bigelow Expandable Activity Module. Known as BEAM, the module is attached to the International Space Station and continues to perform well during its technology demonstration mission.