SAN FRANCISCO (B612 Foundation PR) — The Asteroid Institute, a program of B612 Foundation, today announced it is using a groundbreaking computational technique running on its Asteroid Discovery Analysis and Mapping (ADAM) cloud-based astrodynamics platform to discover and track asteroids. The Minor Planet Center has confirmed and added the first 104 of these newly discovered asteroids to its registry, thus opening the door for Asteroid Institute-supported researchers to submit thousands of additional new discoveries.

END_OF_DOCUMENT_TOKEN_TO_BE_REPLACED

Asteroid Day is an official United Nations’ day of global awareness about the opportunities and challenges that asteroids present. Asteroid Day was co-founded by astrophysicist and famed musician Dr Brian May of the rock group Queen; Apollo 9 Astronaut Rusty Schweickart; Filmmaker Grig Richters; and B612 Foundation President Danica Remy to educate the public about the importance of asteroids in our history, the role they play in the solar system and how they could affect our future.

END_OF_DOCUMENT_TOKEN_TO_BE_REPLACED

SILICON VALLEY, CA., May 10, 2018 (B612 Foundation PR)-– The Asteroid Institute, a program of the B612 Foundation, has announced a new collaboration with York Space Systems to explore a data-gathering constellation of satellites for a new asteroid tracking system. In addition, the Institute will join York’s innovative program with Metropolitan State University (MSU) of Denver, by engaging students to work on the project, providing both motivation and practical skills to train the next generation space industry workforce.

“We are tremendously impressed with York’s capabilities, facilities and engineering expertise to initiate this collaboration,” stated B612 President Danica Remy. “We are also highly supportive of their innovative enterprise business model, which integrates all segments of a space mission, from provision of the standardized bus through launch and mission operations. This allows an organization like the Asteroid Institute, to concentrate on developing special purpose instruments with partners and advanced data processing, while York takes responsibility for the spacecraft mission.”

END_OF_DOCUMENT_TOKEN_TO_BE_REPLACED

SILICON VALLEY, Calif., February 28, 2018 (B612 Foundation PR) — The Asteroid Institute today announced Google Cloud and AGI as new technology partners in the development of the Asteroid Decision Analysis and Mapping (ADAM) project. ADAM is being designed as a cloud-based platform to provide analytical tools to help scientists, world leaders, and citizens understand the unprecedented flood of asteroid discoveries expected within the coming decade.

The ADAM Cloud Platform will support transparent analysis of asteroid data with open and published algorithms. The fact that scientists worldwide will be able to build upon and extend the analytical tools will allow ADAM to act as a baseline for comparison and collaboration. ADAM will be used to assess threatening situations, identify and trade-off possible realistic courses of action and create actionable decision making data.

END_OF_DOCUMENT_TOKEN_TO_BE_REPLACED

SILICON VALLEY, Calif. (B612 Foundation PR) — The B612 Foundation today announced the formation of a new science and technology institute dedicated to protecting Earth from asteroid impacts. Dr. Ed Lu, three time US astronaut and Co-founder of B612, will serve as Executive Director of the new B612 Asteroid Institute, collaborating with a team of planetary scientists and engineers from around the world to conduct research, technology development, and data analysis on asteroid detection and deflection.

END_OF_DOCUMENT_TOKEN_TO_BE_REPLACED NASA has terminated an unfunded Space Act Agreement with the B612 Foundation, a private organization whose goal is to launch a spacecraft called Sentinel that would conduct a comprehensive search for asteroids.

Its primary purpose was obtaining NASA technical consulting and agreement for B612 to use NASA tracking facilities for Sentinel after it was launched.  In return, B612 would keep NASA informed of the spacecraft’s technical characteristics and progress and deliver data from the spacecraft to the Minor Planet Center….

NASA spokesmen Dwayne Brown and Dave Steitz confirmed via email that NASA terminated the agreement with B612.  Steitz explained that B612 had not met an important milestone in the SAA — starting Sentinel’s development — and NASA therefore terminated the agreement because “due to limited resources, NASA can no longer afford to reserve funds” to support the project.  “NASA believes it is in the best interest of both parties to terminate this agreement but remains open to future opportunities to collaborate with the B612 Foundation,” he added.

B612 Vice President for Communications Diane Murphy also confirmed the termination, but said NASA had invited them to return to obtain another SAA when Sentinel’s launch date is closer.   She noted that “our timeline is dependent on our fundraising — and while that is going well – it is hard … and taking longer than we first anticipated.”   She provided a statement from Lu asserting that the “status of the SAA in no way changes the resolve of the B612 Foundation to move forward. … We will continue to work independently and together with NASA, the US Congress and others to see our goals realized.”

Foundation President Ed Lu received $240,000 in compensation in 2013. Secretary and Chief Operating Officer Danica Rema received $209,443 for the year. The tax return also lists an additional $271,277 in other salaries and wages. The return does not state who received this compensation. Almost half of it — $132,171 — is attributed to fund-raising expenses.

In a setback for efforts to find giant space rocks that could kill us all, the B612 Foundation is not having much luck raising money for its asteroid-hunting Sentinel spacecraft.

Yet progress has been slow. The B612 Foundation raised donations of roughly $1.2 million in 2012 and $1.6 million in 2013 — far short of its annual goal of $30 million to $40 million. NASA says that Sentinel has also missed every development milestone laid out in the 2012 agreement. In a January statement to an advisory panel, NASA said that its “reliance on the private sector for a space-based NEO survey … is being re-examined”. NASA’s Lindley Johnson, director of the near-earth object programme, declined to speak to Nature, citing the ongoing discussions between the B612 Foundation and the agency…

If Sentinel receives substantial funding soon, it could launch by late 2019, says B612 Foundation chief executive and former astronaut Edward Lu. Even if NASA terminates its agreement with the foundation, he vows to keep the project going. “Believe me, I could do a lot of other things,” he says. “But I feel this is extremely important.”

Meanwhile, a group at NASA is pursuing a satellite of its own, which is competing with two dozen other proposals for funding.

NEOCam, meanwhile, would use an infrared telescope to search for asteroids from a vantage point between Earth and the Sun. In September, NASA will decide whether it is a finalist out of more than two dozen proposals being considered for launch by 2022 through the Discovery programme, which caps each mission’s cost at $450 million.

SEATTLE, WA (Earth Day, April 22, 2014) — At a press conference on Tuesday at the
Seattle Museum of Flight, three prominent astronauts supporting the B612 Foundation presented a visualization of new data showing the surprising frequency at which the Earth is hit by asteroids. The astronauts were guests of the Seattle Museum for a special series of public events on Earth Day 2014.

END_OF_DOCUMENT_TOKEN_TO_BE_REPLACED MENLO PARK, CA / LOS ANGELES, CA (B612 PR) – Broken Bells are proud to announce an exciting partnership with the B612 Foundation beginning with the band’s April West Coast tour. During these dates, $1 from every ticket sold will be donated to the B612 Foundation to help fund their Sentinel Mission, one of the most important space missions for humanity—one that seeks to protect Earth while preparing for future exploration. More information pertaining to the B612 Foundation can be found below.

END_OF_DOCUMENT_TOKEN_TO_BE_REPLACED

MOUNTAIN VIEW, CA (Sept. 17, 2013, B612 PR) – The world’s first privately funded deep space telescope mission, the B612 Foundation’s SENTINEL MISSION, has announced new support and additions to its Board of Directors, Strategic Advisory Board and increased financial support keeping the mission on track to launch in July 2018.

“The third quarter of 2013 was successful for us in many ways, as we received both welcome financial support, including a seven figure contribution, as well as added another wave of highly successful individuals to our team: the Strategic Advisory Board, Founding Circle and Board of Directors,” said Dr. Ed Lu, Co-Founder and CEO of the B612 Foundation. “These are the forward thinkers who are stepping up to ensure the security of our planet. We are very appreciative.”

END_OF_DOCUMENT_TOKEN_TO_BE_REPLACED 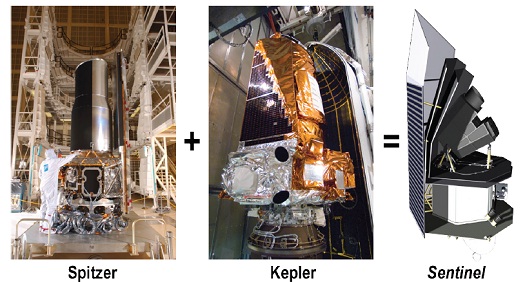 Dan Leone at Space News has a great update on plans by the B612 Foundation to launch its $450 million Sentinel asteroid-hunting telescope:

B612 plans to launch Sentinel in 2017 or 2018 aboard a Space Exploration Technologies Corp. Falcon 9 rocket, possibly as a secondary payload, according to Troeltzsch.

END_OF_DOCUMENT_TOKEN_TO_BE_REPLACED

MOUNTAIN VIEW, Calif., Oct. 11, 2012 (B612 PR) — The B612 Foundation today announced the formation and initial findings of its Sentinel Special Review Team (SSRT) to aid B612 in building the world’s first privately funded deep space mission to protect Earth by providing early warning of threatening asteroids.

The SSRT will provide technical advice and assistance during the development and operations of the Sentinel Space Telescope mission.  Members include scientists and aerospace experts independently selected by the B612 Sentinel leadership, and members assigned by NASA, which is providing technical support through a Space Act Agreement.

END_OF_DOCUMENT_TOKEN_TO_BE_REPLACED

MOUNTAIN VIEW, CA, September 19, 2012 (B612 PR) – The world’s first privately funded deep space mission – SENTINEL – received major support this week from prominent members of the business and financial community who joined the B612 Foundation’s Founding Circle. Founding Circle Members not only contribute substantial funding to the mission, but also pledge continued support in multiple areas of finance, technology and science.