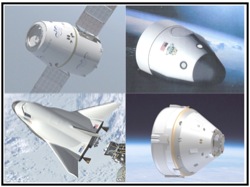 NASA PR — WASHINGTON — NASA announced today a modified competitive procurement strategy to keep on track the agency’s plan to have U.S. companies transport American astronauts into space instead of outsourcing this work to foreign governments.

Instead of awarding contracts for the next phase of the Commercial Crew Program, the agency plans to use multiple, competitively awarded Space Act Agreements. Using competitive Space Act Agreements instead of contracts will allow NASA to maintain a larger number of partners during this phase of the program, with the flexibility to adjust technical direction, milestones and funding.
This flexibility is important during a period of high budget uncertainty when NASA is receiving less funding than President Obama requested for the agency’s commercial space program.

“NASA is committed to ensuring that U.S. companies are sending American astronauts into space,” NASA Administrator Charles Bolden said. “This new acquisition strategy will allow us to preserve competition as we maintain our momentum to provide a U.S.-based commercial crew launch capability at the earliest possible time.”