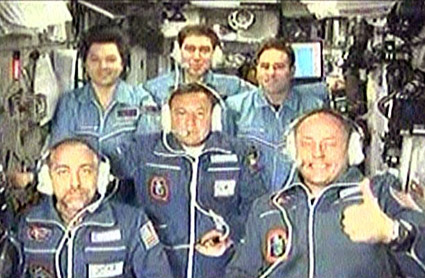 Well, the bloom is off the rose, at least as far as Russia’s manned spaceflight is concerned. In a place where the names of Gagarin, Titov and Leonov were once household names, few people know who the nation’s space heroes are anymore. Or much care.

Russia Today reports on the results of a recent poll conducted by the All-Russian Public Opinion Research Centre.

The latest VCIOM poll results, however, are not so optimistic. Over 60 per cent of Russian citizens say they donâ€™t want to make a space flight, with only 19 per cent saying they would like to. Another 15 per cent of those questioned say they had earlier wanted to fly into space, but now have changed their mind.

Russian people also proved rather wary about their children choosing the profession of cosmonaut: only 23 per cent wouldnâ€™t mind if their child wanted to become a spaceman. In 64 per cent of cases, Russians are opposed to this.

Meanwhile, Russians are divided about the parade of Western tech moguls who have taken vacations aboard the International Space Station:

The question about space tourism divided the polled Russians almost in half: 48 per cent of respondents assume that it is necessary to make space flights more available for people from different social levels, whereas 41 per cent of the polled believe that only professional cosmonauts should fly into space.

Not exactly a ringing endorsement, is it?