A familiar looking symbol can be seen at the Mojave Air and Space Port in this satellite photo from Google Maps. This is actually the “A” in Mojave in the spaceport’s logo.

Now you might be forgiven for thinking that this letter looks more than a little bit like an insignia from a certain science fiction show about a bunch of star trekkers called….believe it or not….Star Trek. Let’s take a looksie, shall we? Yeah, a little bit. Or, maybe more than a little. But, probably not enough to get anyone sued for trademark infringement, copyright violations, or insulting the memory of Gene Roddenberry (the latter, still a capital offense in Hollywood).

Of course, Star Trek and Mojave go way back nearly 50 years to the original pilot called “The Cage.” In that episode, Capt. Christopher Pike (below) is captured by aliens who try to get him to mate with a human female. Now, the aliens can make Pike see whatever they want him to, so in one scene they take him back to his hometown of….wait for it…you won’t believe it….Mojave.

OK, in retrospect, maybe that was a teensy wee bit obvious.

But, the cool thing was, Mojave was like a national park with green trees and grass and flowers and other green things that you kind of forget even exist after living out here long enough. It actually looked like a place you’d want to live. Which I’m pretty sure nobody saw coming.

Of course, this is science fiction. And it is set in the distant future when we have star ships. Or at least suborbital space tourism flights. Really, whichever comes first. At least one of these things would be a mere 18 months away by that point. Probably the suborbital flights. Or maybe star travel. It’s hard to say.

But, I digress. There is currently an effort to revitalize Mojave called — of all things — Revitalize Mojave. Part of that effort involves finding ways of rich story of the town through murals and other feats of artistic expression.

I think the town needs statutes of its most famous residents.  Burt and Dick Rutan would be clear choices. Or maybe Dick and Burt Rutan. Whatever order they want to do it in. We’ll let them decide.

They also need Christopher Pike. Sure, he never really existed. But, there are statues of fictional television characters who never existed in cities all across the nation. Spunky divorcee Mary Richards in Minneapolis. Crime fighter machine Steve McGarrett (Version 1.0) in Honolulu. Sheriff Andy and his son Richie Cunningham in….wherever they put those things. Milwaukee?

As some wise sage once said –and I think it was Mark Twain, because he seems to have said it all — “reruns all become our history.” So, why not Christopher Pike in Mojave? Let’s beam him down into Mojave!

The artist would have a choice of Christopher Pikes upon which to base his statue. He could go with the Classic Pike played by Jeffrey Hunter (above), who looks a bit like a younger, less jowly version of Mitt Romney without the greying hair on the side.

Or he could base his statue with Christopher Pike 2.0, played by Bruce Greenwood in the recent movie reboot of the franchise. It really doesn’t matter to me. I like both actors.

Whatever the selection, let’s avoid using Zombie (or is it Xombie?) in the Wheelchair with the Blinking Lights Christopher Pike. 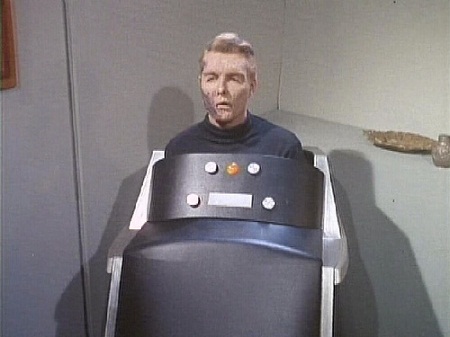 That would be very depressing. Very depressing, indeed. And that’s really the last thing people need out here.

In the words of another legendary Star Fleet officer by the name of the Captain James Tiberius Crunch, “Make it so!”